Billion to Crore/Crore to Billion Converter

To convert numbers from billion to crore or crore to billion, enter the value and hit calculate button

The Billion to crore/crore to billion converter (it can be used both ways) is an online calculator that converts values from one numbering system to another.

Other than providing the calculating result for the input value, it gives other conversions such as billion to lakhs, million, and trillions.

What is a billion to crore conversion?

The conversion is done so that people using either system can clearly understand the volume of value or amount. 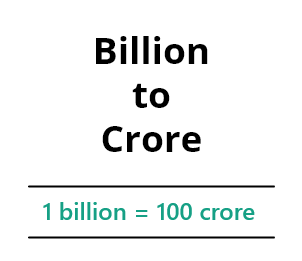 The numerical representation of billion is 1,000,000,000. It is a place value used internationally except for a few countries.

Crore is written in numbers as 1,00,00,000. It is most commonly used in South Asian countries like Pakistan, Bangladesh, India, and Sri Lanka.

In billion to crore conversion, you are not only representing the numbers in terms of a different place value but also a different numbering system.

One billion(109) equates to 1000 million (106). This conversion is the place value conversion. On the other hand, one billion is also equal to 100 crores (107). Here, you are jumping from one numbering system to another.

How to convert billions to crores?

For this, use a crore to billion converter. But if you wish to perform the conversion manually, then keep in mind the following two points.

How many crores are in 78 billion?

How much means 1 billion?

In general, 1 billion is mathematically written as

To write such a larger term mathematician denotes it by one billion.

How many crores makes 300 billion?

As we know that 1 billion is equal to one hundred (100) crores. Similarly,