Enter the base and power values in the input boxes of the exponent calculator to evaluate the exponent.

With this exponent calculator, you can find the result of both positive and negative exponents. The input system is simple and easy to understand. By clicking on “show more”, you can also see all the steps of calculation.

What is the exponent?

Exponents can be defined as,

“The exponent of a number says how many times to use the number in a multiplication.” 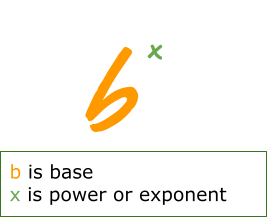 How to solve exponents?

There are two types of exponents; positive and negative.

Exponents of a base that are equal to or greater than zero.

Step 1: Write the base, power number of times.

Exponents that are smaller than zero.

Step 2: Write the base, power number of times.

This is the basics of exponents. On digging a little deeper, you get the rules or laws of the exponents. These rules help to minimize the steps required for simplification.

If you do not use these rules and solve the exponents on your primary knowledge of PEMDAS, you will still get the same result but just a little later.

Some say there are 7 laws while some believe there are 8 laws. There are also the ones who write 10 laws of exponents.

In the end, it is just the number of shortcuts you know to accelerate the calculations. The count does not really matter.

For your ease, we have divided the exponent rules into categories. i.e Simple and complicated.

You can call them the introductory or common sense laws too ????. These three rules are:

Disclaimer: This Category and name of the rules are not mentioned by any mathematician. These are just devised to make the rules understandable.

There are six main rules that fall under this heading. They may look difficult but by paying some attention, you can understand them alright.

This rule also goes by the name “Product law”. When the bases are the same, the different powers are added.

It can be explained by thinking how many times the b needs to be multiplied. Let’s take an example.

The Y is first multiplied three times and then 2 times.

This means the final answer will be equal both ways. It is because the value Y in a particular problem represents a specific digit. It is not possible to say Y is equal to 5 and then Y is also equal to 10.

Since they have the same values, the powers are combined.
Unless the problem in question is related to roots.

Very similar to the previous law, this law is called “Quotient Law”. For its explanation, take the previous example with a division sign.

The two Ys in the upper value will be canceled out by the Ys in the lower value. That leaves only one Y. Same way when 2 is subtracted from 3, you get one Y.

“Power of a product rule”. When two values in a product have the same power, they can be separated.

Hopefully, it makes sense after the previous law. Its name is the “Power of a quotient rule”.

The “Power to a power rule” states that when the base(b) is raised to two powers, first m then n, the powers are multiplied. It is a little hard to comprehend it but you can see the verification example below.

Now, without implementing the law.

This is the “fractional power rule”. When the power is in the form of a fraction, it is nearly impossible to solve it by hand. This is why it is changed into the square root form.

As you may know, Y1/n = n√Y. This justifies the rule if bm is considered Y.

That is it, the laws of the exponents.

How to evaluate the nth power of a number?

Let's say we have the nth power of base value is "b." Then for nth power b is multiplies to itself for n time. Suppose we have to find the 4rth power of b, then it will be b*b*b*b*b.

Some of the examples solved by this nth power calculator are given in the below table.