AllMath / Blogs / Introduction to Limits and its applications in Calculus

Introduction to Limits and its applications in Calculus

To learn about limits and its applications, it is best to have a fair knowledge of functions, derivatives, and integrals. If you are all set with that, let’s dive straight into the topic.

Let’s read about the first part of our topic. In this section, you will learn what are limits, limit notation, its types, and how to find limits.

Limits are defined as:

“A concept based on the idea of closeness, used primarily to assign values to certain functions at points where no values are defined.”

To make it more clear, consider a function f(x) = x-3 is undefined at 2. This means we cannot find the value of the function at x=2.

The same will be done by limit. Meaning here is that you can know the limit of f(x) at x=2. You will have to put 2 in the function and the answer will be the limit (not the value) of the function at 2.

The example above will be represented as:

This is called limit notation. It is read as “The limit of the function (insert function) as x (or the function’s variable) approaches to (insert undefined point).

How to apply limits?

Limits are easy to find. Just put the value in the function and you will have the limit. If you want to know “whether the limit exists or not” find both right and left-sided limits.

If the values are the same, a limit exists. Alternatively, you can use the Limit calculator to solve the limits.

Evaluate the limit from the right for function 1/(x-2) at 2?

Apply the limit on the right side. 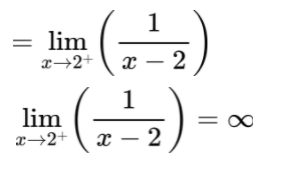 The limit from the right is at infinity.

So, this was the basic introduction of limits. Let’s move to the second part of our topic.

Limits have made maths and calculus very easy. It is a widely used concept. Continue reading to know three main uses of limits in maths.

Finding the value of discontinuous functions:

For a continuous function, you can define any value for x and y (i.e f(x)). For example, for the function f(x) = x-1, the graph of this function is given below. Consider the value of the function at x=3.

Now, we don’t need to move along the x-axis from either direction to find the value of f(x) on x=3. It is because the function is defined at the mentioned point.

So, why did we discuss it all? It is because not every time a function is continuous. There are discontinuous functions as well. Therefore, to find the undefined values for such functions, we will need this knowledge.

For instance, look at the graph below: It is the same function that we discussed before, but this time we have an exception. The function is undefined at x = 2. This is the place where the limit will help us.

Although, we cannot reach that value since the function is undefined at that point. But it will give us the closest approximation. We will say that the limit of f(x) at x = 2 is equal to 1.

Note: The value of f(x) will NOT be 1 but the limit will be. Keep the difference in mind!

In the example above you had a graph to make an estimation of the value of the function. But when you have no graph, how to know that the answer is really close to the probable function value that the limit has given?

Take a function f(x) = x - 1 and assume that it is discontinuous at 4. Now start putting the values closest to 4 from the left.

We are still getting closer to 3. Hopefully, you have understood by now. Here you can see that limits made it possible to vaguely define a function at the discontinuous point.

Derivatives also use limits. The concept of derivatives lies in bringing two points, on a curve, infinitely close so that we can find the slope between those two points.

So how do we bring two points so close that neither they are the same points nor at a noticeable distance? Yes, you are right. We use limits.

We consider that the distance between the points is delta which refers to a very very small value in maths. This means we have two points such as;

When we find the slope for these points, we get the below formula.

This should have worked as the delta x is infinitesimally small. But we still apply the limit to make it almost zero.

Now, the distance between the points is almost zero similar to the values closest to the undefined point in the discontinuous function. It will give an accurate value.

You can prove the rules of differentiation, especially quotient and product rules using the limits as well.

As you might know already, definite integrals are used to find the area under the curve. But this area is between specific points.

Let’s say you want to find the area between points a and b on the x-axis. Using the Riemann sum, we will have to divide the area into n number of rectangles of width Δx.

But as you know, the value will not be precise. There will still be some area uncovered. So what we do is that we apply a limit on the number of rectangles.

But here, Limits solve the problem. This is the function of the limit. This way we can find the sum for the areas of an infinite number of rectangles and know the exact area under the curve between the points.

We write it as:

This equation might confuse you a bit but since it’s not the actual point, we will not dwell on it. The point is how the limits are used in the integration.

So these are the main applications of limits in calculus and maths. Hopefully, you got some useful information from this article.